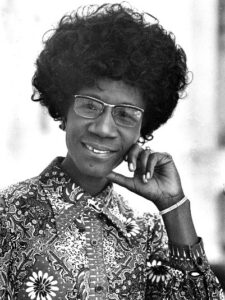 Beginning her career as a Teacher’s Aide in a Brooklyn childcare center, Shirley Chisholm, born in 1924, earned a Master’s degree and became an early childhood teacher and expert in early education. She served as director of a childcare center until the late 1950s, then as an educational consultant for New York City.


In 1968, Ms. Chisolm became the first Black woman elected to the United States Congress. She represented New York’s 12th congressional district. In 1972, she became the first major party Black candidate to make a bid for the U.S. presidency.


Born to immigrant parents, Chisolm said of her upbringing, “I learned from an early age that I was a somebody.”
Ms. Chisolm served in Congress for seven terms from 1969 to 1983, rising to leadership level. In 2015, she was posthumously awarded the Presidential Medal of Freedom.